Note: I started on a general CHVRCHES write up I intended to post first but because I am a slacker, I didn’t finish it yet.

Screen Violence is the fourth full studio album from CHVRCHES, and the first that I’ve gone through a “release cycle” for.  It was preceded by three singles, He Said She Said, How Not to Drown, and Good Girls.  The videos all share a sort of kaleidoscope motif similar to the video for Gun.  I suspect this was done somewhat out of necessity due to COVID and travel restrictions, it helps minimize actual contact between people and reduces cross contamination risks.  Each had a sort of themed color, and all three featured the same rotating doorway.  How Not to Drown is a featured collaboration with Robert Smith of The Cure.

The release cycle has been quite fun, especially while hanging around the CHVRCHES fan discord.  There have been a couple of great live streams from iHeart Radio and Amazon music.  The Amazon show in particular made me even more excited to see them live later this year (assuming COVID doesn’t kill the tour).    A few more songs from the new album would be nice for the regular tour, but honestly I do like the idea of a nice mix of old tracks in there as well, which was what we’ve seen so far.

I didn’t jump on the merch train aside from having a CD on the way.  I’m not super keen on the design of the merch for Screen Violence, I’d be more inclined to buy something Love is Dead or Bones themed.

The whole album is pretty solid, though at this point I’m not sure that it’s their best album, more time is really needed to decide on that, there’s a few tracks that are just more “ok” than great, and overall there’s some good tracks but not too many really amazing tracks that just really stand out on initial impressions.  It’s definitely a darker tone and kind of a less chaotic feel than previous albums, which is nice.  It’s good, I’d recommend it, but I am undecided on if it’s their best album.

Asking For a Friend – I’m really enjoying the sound on this track, a pretty good upbeat feel to it.  I rather like the chaotic sound of the background rhythms.

He Said She Said – Originally my favorite of the three pre-release singles, but Good Girls over took it.  I still like it and I find “Angry Lauren” kind of amusing.

California – This track really fits the same movies theme of Final Girl later on the album.  It’s a pretty good upbeat track that slowly and quietly builds itself up over the course of the run.  It feels like it’s likely going to be very popular.

Violent Delights – At least Martin gets a little bit in this track, since he doesn’t get his own track in Screen Violence.  I’m not sure that I find this track super amazing on initial impression, but it also feels like it could be a track that could easily grow into being a favorite over time.  It has a nice progressive and airy feel that reminds me of other popular tracks like Night Sky or We Sink.

How Not to Drown – Definitely my least favorite of the three pre-album singles.  I think that enjoyment of this track depends entirely on how much people like Robert Smith and the Cure.  Personally, it kind of drags on and halfway through I’m already wishing it were over.

Final Girl – An interesting sound, it feels a lot more like a “traditional band” with the guitar and drums.  It’s got a pretty nice lower tone kind of retro feel to it for sure.  Interesting theme of the lyrics being literally about the “final girl” survivor of horror movies.

Lullabies – This song reminds me quite a bit of Deliverance with it’s nice and steady and even tones.  It’s not a particularly stand out track but there’s nothing particularly awful about it.

Nightmares – I enjoy the larger sound of this track and the general down tempo fullness, but there’s something that feels off I can’t quite figure out that I’m not really feeling.  Some good synth work going on here though.

Better if You Don’t – A nice light closer, which has become a sort of standard it seems, though it’s not nearly as light as say, Afterglow.  Just a nice guitar backed, light rhythm, track.  I like it.

And just to sort of wrap up here, I figure I’ll throw in my personal ranking of all ten tracks on the album. 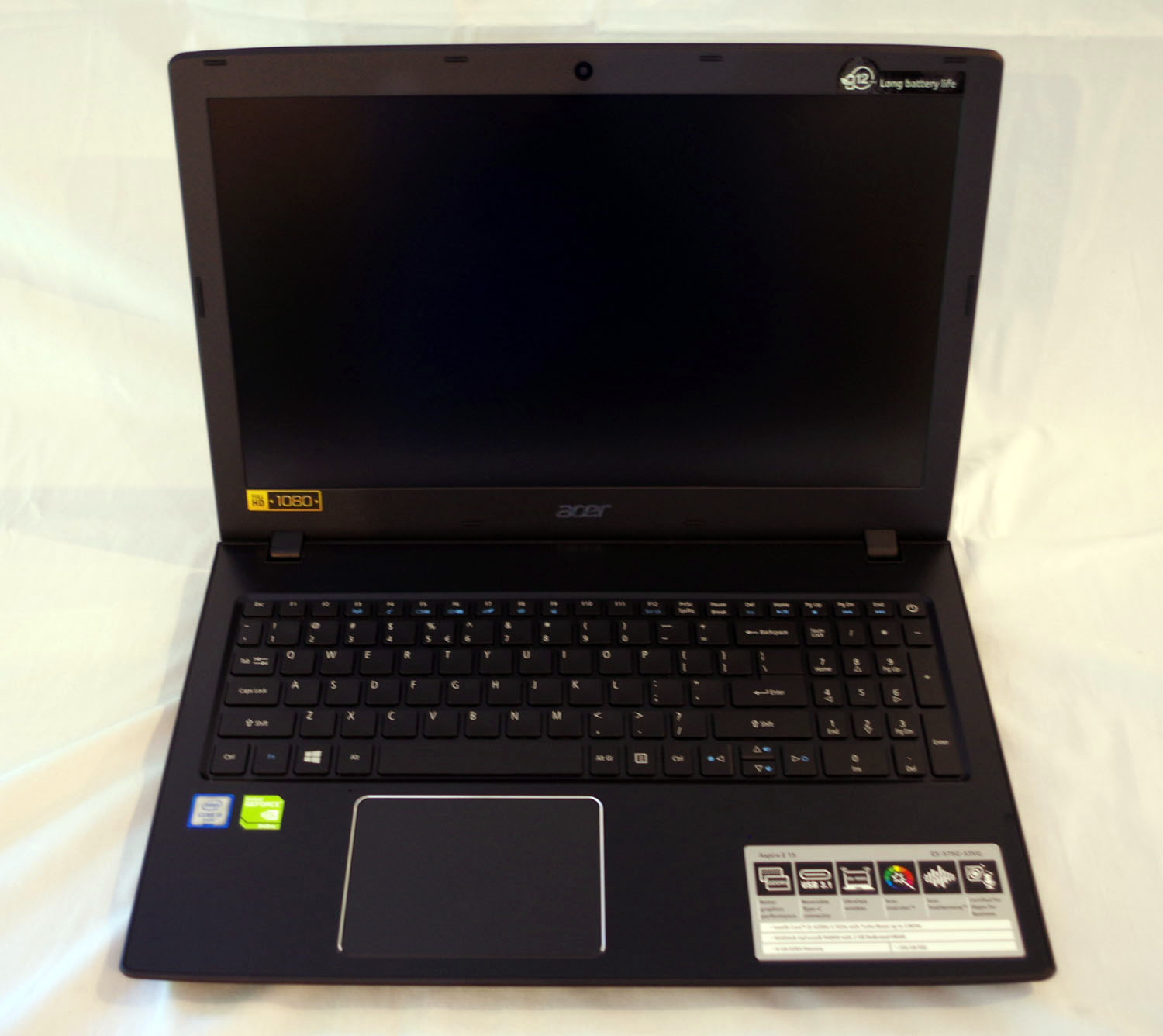 So, right up front I want to say, I’m not trying to sell this as the most amazing machine ever or anything.  I mostly just want to give some thoughts and sort of initial impressions.  I’ve been previously using an HP 311 Netbook as my laptop.  I would argue, at the time, that it definitely was “The best Netbook”.  It’s like 5-6 years old now, it runs like complete crap despite my best efforts.  I’ve replaced the battery and power cord on it 3-4 times, it has all sort of flakey issues with the trackpad and keyboard that start to crop up after it runs for a bit, it’s just, definitely showing its age.  I’ve updated it recently with an Acer Aspire E15.

I’ve been trying and working towards a replacement laptop for a few years now.  I’m awful about saving up large chunks of money given my other hobbies and saving for a laptop is quite a chunk of change.  It also doesn’t help that I keep within my own personal spending budget, and a lot of any “extra income” over the years went to household needs and outfitting everyone else in the family with laptops.

My other problem was trying to decide just what I wanted.  Ideally I wanted something nicer, say, closer to $1000 or so than $500, but saving to that point is kind of a huge hurdle.  I wanted something capable of running games all right, I don’t need or want “highest settings perfect framerate” but I wanted something that would run smoothly for the games I like to play.  These sort of requirements presented a few issues.  Most of the more expensive laptops push form over function, so they would probably work all right for my needs but the higher price mostly means I’m paying for “fancy” looking.  Anything that’s a “Gaming” laptop in that price range is probably overkill for what I want and would be a 40 lb slab of computer.

I also have lost track of “what makes a computer good” several years ago.  Mostly because computing power really plateaued for general use a few years ago.  There’s not a huge difference in computers now than 3-4 years ago aside from power consumption, which is kind of minimal.  In the old days it was simple, more mhz, more ghz means it’s better.  The only real “requirement” I had for processor power was i5 or i7, no i3.  I wanted a decent chunk of RAM, say 8GB+ and some sort of discrete GPU.   Just having some sort of GPU vs “Intel Integrated Graphics” would meet my gaming needs.

I also decided that at some point I needed to stop waffling on what I wanted and just pick something.  I did some searching around on Amazon, filtering specs and such to get less and less selection.  I had kind of been hoping to find a Lenovo Thinkpad but none of them in my price range meet my Graphical desires and they are all brickish.  The brick part wasn’t such a turn off as the integrated graphics.

I eventually settled on the Acer Aspire E15.  It’s a relatively new release (seems to be 2016), it met my desire on specs, it looked fairly nice design wise, it has a ten-key pad.  It was also within my current budget at around $550 dollars.  I did some checking online for reviews and chatter on Reddit and it seemed to be a pretty well liked machine.

I ended up finding it for a $100 less on NewEgg as well, with a 1TB 5200 drive instead of a 256GB SSD.  Now I had a choice to make, way more storage, at a much slower speed, or keep the nice quick SSD.  I even considered ordering the 1TB version and buying an SSD to put in it, essentially giving me a free 1TB drive to use for, whatever.  In the end, I opted for the SSD, for more money.  Having the extra 1TB drive is actually less useful to me than it sounds, I have something like 8-10 TB easily already going in the house across several machines, and I wanted the performance boost of the 256GB SSD.  Also, the hassle of figuring out the best way to install the OS onto the SSD, while not hard, was more trouble than I cared to bother with.  The whole point of upgrading is performance boost over my old laptop.  The most frustrating part of my desktop is I’m still using shitty 5200 RPM drives in it, and it’s the main bottleneck for sure.

So, onto the actual laptop on some initial impressions.  I’ve been using it for a few weeks now.  It is definitely a nice improvement over my old netbook.  I like having Windows again, though I still like Linux, I like the keyboard with its chicklet keys, I’m satisfied with the size and ports.  It’s even got a USB-C port, which I didn’t notice before buying it.

The 256GB drive is a little tight.  I mostly just need to keep myself more limited to things I’m actually going to use but I’ve installed World of Warcraft, Skyrim, Minecraft, Wildstar, Photoshop, Diablo 3, Office 2010, and a handful of developer apps and I’m already down below 100GB free.  It’s a bit too close for my comfort but I’ll learn to deal with it.  Also, everything runs nicely as expected, though the machine does start to get pretty hot after running Wildstar and Skyrim for a while.

It’s not a touch screen either.  Back when Windows 8 was the hot thing, I would have been all over a touch screen, Windows 10 took us back to a more traditional interface and so the touchscreen is less necessary.  It’s still something that’s kind of neat if it’s there, but it’s less required.

In general, it does seem like a pretty good all-around machine for the price point.  That said, you could probably drop down a bit in price if you don’t want something with a discrete GPU.